The Robert L. Forbuss Lifetime Achievement Award is named in honor of the first Executive Director of the American Ambulance Association. It recognizes a volunteer leader who has made a significant long-term impact on the association. Julie has held numerous leadership positions in the AAA including Membership Committee Chair, Region III Director and Alternate Director. She has worked tirelessly to get members of her Region to join the AAA, knowing that it is important to participate in the national organization to be part of the team finding solutions to today’s challenges in EMS.

“In her years of service to the AAA, I cannot remember a Board meeting, Stars of Life or Annual Conference that Julie has missed. She comes prepared to tackle the difficult policy issues and goes above and beyond the call of duty to show her Stars her gratitude for the work they do.” Julie is a Star in my book, said AAA President Mike Hall.

It is for this service that the AAA is proud to recognize Ms. Rose with the 2016 Robert L. Forbuss Lifetime Achievement Award.

Julie Rose will be presented with the Robert L. Forbuss Award at the AAA Conference and Tradeshow in Las Vegas, Nevada on November 8, 2016. This event is the premier event for leaders in the ambulance industry, featuring exclusive education, networking, and cutting edge technology.

The AAA is based in Washington, D.C. Its ambulance operation members across the United States provide coverage for more than 95% of the urban US population with emergency and non-emergency medical transportation services. Founded in 1979, the AAA’s mission is to “promote health care policies that ensure excellence in the ambulance services industry and provide research, education and communications programs to enable its members to effectively address the needs of the communities they serve.” 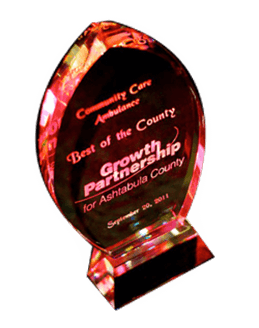 The annual event celebrates the county’s economic development success stories and the leaders behind them. Increasingly, nonprofit groups such as CCA and their leaders are being recognized by the event.

The leading non-profit organization providing the highest quality healthcare resulting in superior satisfaction for our patients, team members, and communities.

Honoring all that Served. “Freedom makes a huge requirement of every human being. With freedom comes responsibility.” ~Eleanor Roosevelt